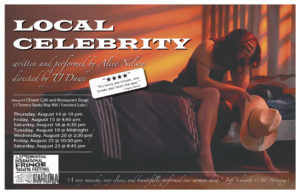 Tina lives in her parents’ basement in the small town of Grande Prairie, Alberta.   Her dream is to move to booming Calgary and go to university, but without any real education she has to resort to mundane jobs in order to save up for the big city.

After stirring an obscene amount of soup at Tim Horton’s, Tina decides to pack in the minimum wage jobs and try a new life—as an escort.   How bad could it be?   Pretty Woman makes it look like a pretty good gig.

As Tina sells her body to oil riggers and rich older men for cold hard cash, something wonderful happens to her—she falls in love with a cowboy, an Alberta country singer who tours small towns.  The cowboy’s a local celebrity.  But then again, by this time, so is Tina…

Could he be her Richard Gere?  Will he rescue her?  Or is it true that every cowboy is just looking for the next free ride?

“It’s about time something like Local Celebrity came along to kick to pieces the mirage of the Alberta Advantage. The one-woman show, written and performed by Alice Nelson, is at times hilarious, at others, heart-wrenching. Meet Tina, a Grande Prairie girl from a devoutly religious family, who nurtures dreams of moving down to the big city (Calgary) and attending university there.

But Tina is never entirely comfortable with her new identity, and we’re with her through an odyssey of confusion, shame, loneliness and heartbreak (the latter courtesy of her musician crush, the Urban Cowboy.)  Nelson performs flawless physical comedy, switching instantly and effortlessly between a wide cast of characters with a simple deepening of the voice, a shift of the shoulders.

And while the play is massively entertaining, its most striking quality is how easy its overall themes were to relate to.

Sad though it may be, Local Celebrity is a disconcertingly accurate depiction of the desolation today’s young women are faced with.    Bang-on.”   ★★★★½  – Robin Schroffel

“Performer/playwright Alice Nelson walks onstage with a sly, mischievous smile to the strains of a bluegrass version of AC/DC’s “You Shook Me All Night Long,” setting the scene for a very raunchy, very clever, and beautifully-performed one-woman show. It’s ultimately a story of dreams lost and illusions shattered – heavy ideas, but Nelson has such an energetic, natural, and likeable delivery that the story is completely engrossing.” ★★★★